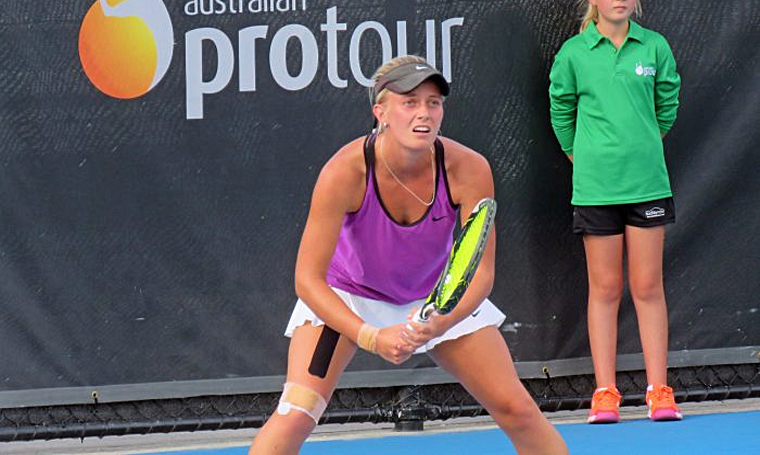 Victorian Zoe Hives has defeated top seed Patty Schnyder for the second time in a fortnight, progressing to the quarterfinals at the Smart Fibre Launceston International.

The 21-year-old had too much firepower for the storied Swiss veteran, earning herself a comfortable 6-4 6-2 victory in just 65 minutes in Thursday’s twilight match on centre court.

It was a similar tale in Burnie last week, with Hives prevailing 6-1 6-2 in their first round contest.

“To come out and have to play her again was kind of hard,” Hives said. “She’s been so good, I knew she was going to try something different to beat me and it felt like she was much more aggressive today. I’m definitely happy to get the win again.”

Despite dropping the first set against Aussie wildcard Kaylah McPhee in the opening round, Schnyder looked to be finding some rhythm in Launceston before her second meeting with Hives ended her Tasmanian campaign.

The 39-year-old – who retired in 2011 only to once again pick up her racquet in 2015 – has enjoyed a stellar career. She is a former world No.7, and has to date has won 11 WTA singles titles, reaching six Grand Slam singles quarterfinals and one semifinal.

After a recent title win in Playford and a semifinal last week at the $60,000 ITF event in Burnie, Hives is finding some consistency at the higher levels.

“I’ve had some success against a lot of top 200 players now, so I’m definitely feeling more confident in my ability to beat them,” she said. “I feel like I’m on the right track.”