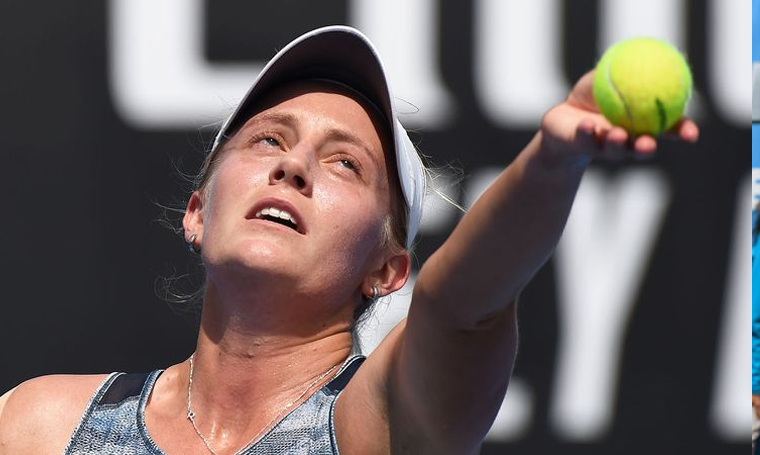 Victorian Zoe Hives has been knocked out of the second round of the Australian Open but she’s left the tournament with enough cash not to have to rely on the bank of Mum and Dad.

The 22-year-old’s exciting campaign came to end with a 6-3 6-3 loss to French 19th seed Carolina Garcia at Melbourne Park on Wednesday.

Despite the defeat, Hives – who emerged as one of Australia’s surprise new stars after flying through the first round in straight sets – will leave $105,000 richer.

“It’s great now that I will be able to financially support my own career instead of (my parents) having to work all the time and pay for everything,” the wildcard said.

“It just takes the pressure off a lot of things.”

The newfound attention may also help the young gun garner some sponsors – she came into the tournament with no one providing her clothes.

But on Wednesday Hives was given an outfit by Canadian activewear label Lululemon.

“Lululemon was good enough to give me an outfit for today but I don’t have anything at the moment, so I’ll just see,” she said.

Hives lost the first four games against Garia, saying she wasn’t used to playing on a larger court.

“The whole thing (was) totally different – I wasn’t too nervous heading out but just the whole different conditions I found it quite difficult to start with,” she said.

“I also don’t think she missed the ball in the first five games which didn’t help.

“But its just a great experience and I can take a lot from it.

Hives will remain in Melbourne to play doubles before heading to Tasmania for a tournament.

She then plans on heading home to the family farm near Ballarat to “process everything” and to check in on the bulls Roger and Rafa.

“We’re not sure what we’ll call the next one yet but I think we’re getting another one next year,” she said.