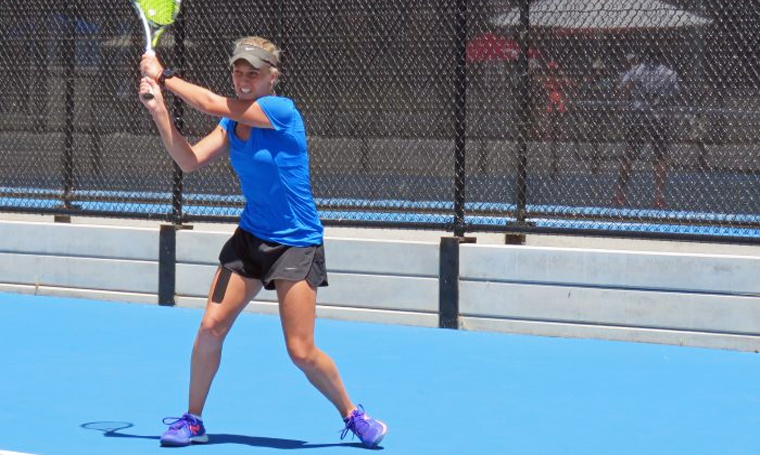 The impressive run of Zoe Hives continued on Friday as she booked a place in the semifinals of the City of Playford Tennis International.

“I’m really excited to be through,” Hives said after overcoming Canadian No.8 seed Bianca Vanessa Andreescu, who was forced to retire with Hives ahead 7-5 5-4.

“I started a little bit slow, but managed to pick it up and finish off the first set really well,” Hives added. “I could see she was a bit sore so I just tried to keep the energy up as best I could.”

The Victorian will be competing in her first ITF $25,000 event semifinal when she faces Czech Marie Bouzkova, the sixth seed, on Saturday. Bouzkova also advanced courtesy of a retirement when veteran Russian – and former world No.2 – Vera Zvonereva, was unable to continue after dropping the opening set.

“I wanted to play the better girls just to test myself against them,” Hives, 21, said of her approach coming into Playford as a wildcard. “I didn’t get that many opportunities to do that last year so I was really looking forward to it this week.

The win also meant a change of plans for Hives as she looks ahead to her Australian Open 2018 debut in doubles with partner Alison Bai. “I actually had a wildcard into qualifying (at the WTA event) in Hobart but now I stay here and play semis instead,” she said.

“I’m taking this for sure. I’m definitely happy.”

Hives was joined in the last four by another up-and-coming Australian, with qualifier Alexandra Bozovic posting a stellar victory over Valentini Grammatikopoulou of Greece 7-6(4) 4-6 6-4.

Bozovic, 18, will also be making her semifinal debut at this level, taking on unseeded Frenchwoman Jessika Ponchet.