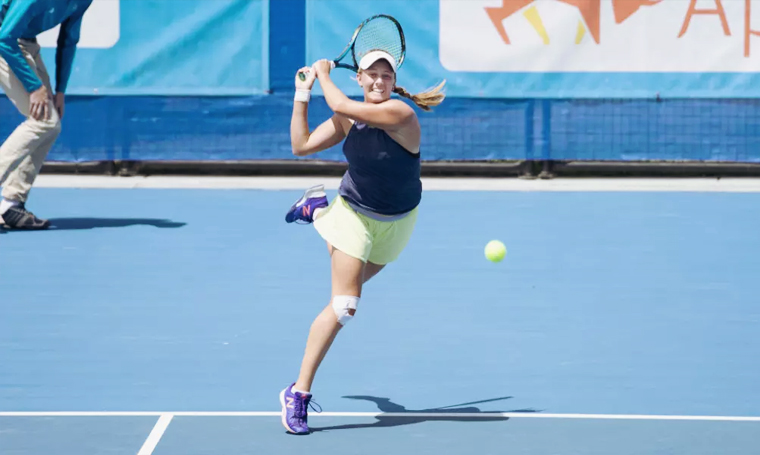 Zoe Hives scraped through the first round, survived match point in the quarters and battled through 33-degree heat in the semis.

But the unseeded Victorian saved her best for last and downed Olivia Rogowska 6-4 6-2 to win the Canberra International on Sunday.

Hives has enjoyed a stunning return from injury and won two the six tournaments she’s played in the past seven weeks, following a three-month layoff.

The 22-year-old clinched her third Challenger title of the season in Canberra but it marked her first triumph in a singles US$60,000 tournament.

“I’m a bit stunned, this whole week I’ve just battled through and I feel lucky to have actually made the final, so to come out and play such a good match… I’m just so happy,” Hives said.

“I found it really hard to get my touch [all week]. That’s why I struggled through the earlier rounds but today I finally felt like I had it and was feeling really good.

“I’ve been working really hard on my conditioning, at the start of the year I wouldn’t have been able to get through a tournament like this with three three-setters, so I’m really proud.

“Everyone can play at this level so the next part is mental and I felt like this week I was mentally strong this week.

“My first match was 7-5 in the third, I wasn’t feeling it but got through. Then I had a match point against me in the quarter-final and got through that 7-5, then yesterday I had another very tough three-setter.

“I don’t think I had a third set in me today. It’s been a very tough mental week but that’s a massive part of the game.”

The victory will see Hives jump 54 spots in the rankings on Monday to a career-high world No. 215 and the Victorian has her sights set on the top 100.

Hives played alongside Canberran Alison Bai in doubles at the Australian Open earlier this year and now wants to make her singles main draw debut.

“I’ll head into a training block then go to the wildcard playoffs for Aussie Open main draw, that’s in December,” Hives said.

“Next year I’ll try and get my ranking in low 100s, that will be my aim but also to stay on court for the whole year because I missed a lot of tennis this year.

“If I play a full year who knows how I’ll be playing, I feel like I could get some really good rhythm and feel good out there.”